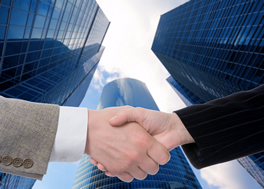 Objections are part of the the sales process, and learning how to overcome come objections is part of becoming a top producer. No salesperson likes to hear an objection, but a good salesperson will be able to handle it correctly and still get the sale. The following are five ways a salesperson can handle a prospect’s objection.

1. Make their objection a reason for them to buy
Tell the prospect that their objection is the reason they should buy. It sounds like it couldn’t possibly be true, but in most cases, it works. You’ll have to tailor the response depending on your product and the objection. Try to only use this once or twice in a sales talk or else it becomes overly confrontational rather then educational. One of our clients outside of Washington, D.C. near Annapolis used this technique consistently when prospects objected to the price being too high or a property being a bit outside their budget. The higher-priced property was typically in a better location, had more amenities and therefore a better investment. The price was higher but so was the resale value, appreciation and ability to liquidate if needed.
2. Let objections be answered by the prospect
Good salespeople can usually get the prospect to answer their own objection or admit that it isn’t even an objection at all. It’s best used when the objection is trivial or the prospect objects about something they aren’t completely educated on. The best way to do this is by letting them talk, so keep asking questions and stay silent as they answer. Eventually, especially if they don’t know much about the topic, they’ll end up admitting the objection wasn’t that important. We did a sales training for a real estate agency outside of Washington, D.C and they found this tip to be a great help. Frequently, prospects would object about trivial things, such as not liking the color of appliances, the fact the the home was carpeted or other minor matters. These may be big issues when you live in a home, but when making a six-figure purchase, a problem that can be corrected for $500 to $2,000 is trivial. Instead of “handling the objection” for the prospect, they asked a few questions, stayed silent, and let the prospect solve the issue themselves. The same technique worked well when prospects made comments about home values. After a few questions, the prospect quickly admitted they were making objections based on opinion rather than factual “comps” and quickly deferred to the realtors expertise on market value.

3. Explain the objection away
Explain the objection to the prospect by giving them facts, and treat it as though they asked you a question. Use what they object to as a way to explain why it might be that way, not simply that it is that way. Objections become less fearful when you see them as a request for more information. Explain the product or service a bit more. Most importantly, see it as a request to further explain value.
4. Admit the objection is true
Sometimes, objections are completely valid and true. In these cases, it’s best to admit that and move on. There’s no use in trying to convince the prospect that something you both know to be true is false. No product is perfect. People buy products all the time in spite of objections and imperfections. Accept the objection, and then point out how the advantages outweigh their concern. Simply stated, you sell value. If the value out weighs the issue or true objection, it is easy to move forward. Another realtor in the Silver Springs, MD area found less weight went to certain objections when they just told the prospect, “Yes, you are right.” Sometimes, the locations may have been a bit loud, the street busy or parking difficult but instead of debating it, they agreed and let the value advantages stand up against the issues.
5. Deny the objection is true
This is only acceptable in rare situations, such as if the objection is very clearly, verifiably untrue. The only other time is if you are fairly certain the prospect only half means what they’re saying. Playful comments are the most likely to be heard if you need to give this answer. Sometimes prospects just say wacky things that are totally off base. In these cases you can smile, and in the friendliest way possible let them know their information is mistaken. Be careful here because we don’t like telling people they are wrong. That often leads to them just battling to be right which usually does not help the sales process.

Facing objections is something every salesperson will have to deal with in their career. Recognize objections are either a signal you need to build more value or educate the prospect further. An objection doesn’t always have to have a negative impact. A good salesperson will figure out how to make their objection a positive.