Sales Training: Do you think like a high achiever?

What’s the difference between a workday, a busy day and a long day?

I often hear business owners and their reps talk about the long days they put in and how busy they are while struggling to attain their goals. I was pondering that thought while at an iconic NYC city restaurant being thankful and appreciative of the many things I’ve been able to experience due to my success in sales.

Early in my career I worked hard and applied myself as so many people do. I thought about some of my recent observations of both young fast track reps and those that were not getting to the next level they “claimed” to desire. I reflected on the difference between those sales reps and business owners that struggle and many of the highly successful reps I’ve worked with and are in touch with regularly. Simply put: A true 8 to 10 hour work day. The top achievers – those on the fast track put in an 8 to 10 hour workday.

Top producers define the 8 hour workday differently than their co-workers. They also hold themselves to a higher standard. Whether I’m speaking with a top sales producer or a highly profitable entrepreneur they all make sure they actually do 8 to 10 hours of work each day to get where they wanted to be. Many of those young fast track reps are now in more established roles and have acquired resources that give them freedom and choice on where and how they spend their time. Many of them no longer need to work “just for the money”. They are driven by other motivating factors and spend their time on activities and dealings that are meaningful to them. Inspired often to be “working for the sport of it”, “the fun of it” or for “the next big deal”. 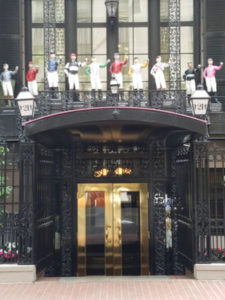 The top producers knew what they needed to do to succeed and did it. For illustrative purposes let’s say they needed to prospect, make calls, write proposals and attend some meetings. For simplicity, each activity was 2 hours each thus totaling 8 hours.

Being young, and interested in the social scene each of the young top producers I’m referring to still wanted to have the long lunch with co-workers, participate in long debates about the office football pool, attended to their personal social media accounts, scoped out the hottest restaurant on Yelp, chatted about dates and planned where to go on the next date. And yes, this was taking place on “company time”during 9 to 5. However, they saw things differently. It was not “my time” and “company time”. It was about putting in the time to achieve their goals and objectives. If 2, 3 or 4 hours of the 9 to 5 time was taken up by non priority activities (or non business activity) while at work they saw it as only working a part time day even if they were at the office for the full day.

Their mindset was different. They often saw it as only a 4 hour work day in the afternoon. Socializing with friends or other tasks made up the other part of the day and then they needed to put in the other 4 hours of “their work day” later that evening. They made sure they did 8 hours of work that day rather then being “clocked in” for 8 hours.

They had fun with their friends. Their sport became getting the deal. Many of their friend’s “sport” was how to look busy, and do as little as possible or just enough to get by. The top producers did 8 hours of work and reaped many rewards – both financially and socially. They went to nicer restaurants, owned their homes, had savings rather than debt, and had their life on track to provide for those they cared about. The co-workers that defined their work day by the time they were clocked in instead of by the time they were actually productive had more to complain about, had significantly less resources and felt less in control of their life and circumstances.

Every Sales Rep Controls Their Own Destiny

Remember: You control your fate. As sales people and business owners we have the freedom to choose where we work and how much effort we put in. Be honest with yourself in regards to the goals you really want and if you are really putting the time in to achieving those goals.

Mark Anthony trains & coaches sales people and coaches business owners on how to pursue and achieve their goals, reach their numbers and be more effective. for info call 877 464 5215 or email info@washingtonsalestraining.com.